Besides his existence as a painter, Salvador Dalí was also a writer. In his literature he used surrealist techniques like automatism and the paranoiac-critical transformation method.

According to Dalí, he wrote this story at the age of 8 years:

Influenced by the avant-garde movement, by the Spanish poet Ramon Gómez de la Serna and by the Ultraists, a Spanish literary movement of 1918, Dalí wrote his Yellow Manifesto in 1928. It was to become the most important manifesto of the historical avant-gardes in Catalonia and probably in Spain too. Addressed to young Catalans, it denounced the putrefied state of all things cultural and fiercely defended modernity and the Futurist and Cubist legacy as well as aspects of Dada. 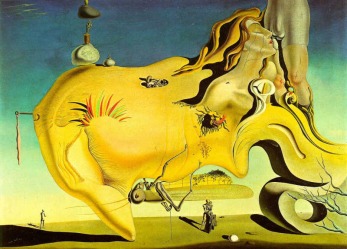 Dalí enters a period in which he manages to merge painting and poetry: The Great Masturbator is a poem and a painting, included in his book The visible woman (1930).

He painted it just before meeting Gala. His needs in Paris by that time became his grief. It is a self-portrait where their sexual desires and fears are reflected. By then Dalí was still a virgin. His shyness was influenced by the knowledge obtained through his father’s books of the reach of venereal diseases. Among several symbols, the following ones stand out: the grasshopper, that terrified Salvador; the head of a lion alluding repressed desires; and a flower-vessel that near the chest of the woman, hopes to be filled. 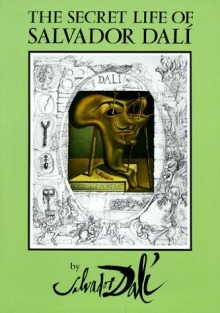 Dalí's stay in the United States brought about a great success. In 1942, at the age of only 38, he wrote his first autobiography, The Secret Life of Salvador Dalí. It was a fictionalized autobiography in which the artist confused true and false memories. Here it becomes obvious that he saw life in a different way than most people. He was more interested in the images that he was able to imagine than in those which really happened. In one of the chapters of the book, called "Intrauterine Memories", Dalí reported his prenatal state inside the womb of his mother. Here the influence of Freud is clearly visible.


But why did Dalí write an autobiography in the prime of his life, aged 38?

There are three hypotheses by Félix Fanés: 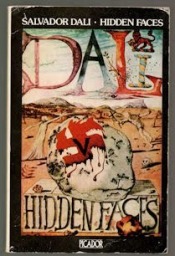 Two years later, in 1944, driven by the success of The Secret Life of Salvador Dalí, Dalí published another autobiography, Hidden Faces. It was never published in Spain though, due to the censorship during the dictatorship of Franco. It deals with the downfall of the old European order and its spiritual resurrection. Hidden in a farm house in New Hampshire he spent four months to finish it, writing fourteen hours a day. The novel was a not quite secret homage to Federico García Lorca, who had been in love with Dalí and who had been shot by the Nationalist militia in the Spanish Civil War. It originally appeared in French and was translated into English. In 2004, in the centenary of Salvador Dalí's birth, the novel was first published uncensored in Spain.

From 1938 to 1945, still in the United States, he wrote a trilogy of ballets, called Bacchanal-Labyrinth-Sacrifice. In the ballets Dalí is able to schematize in visual terms the most abstract theological and mental conflicts, converting the stage into a correlate of the inner human world. 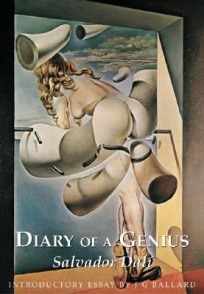 Back in Spain, Dalí spent eleven years on his last literary work, Diary of a Genius. He had a creative fatigue and said that he was not able to paint or write anymore. The third autobiography is a clever insight of Dalí's private life, his problems, concerns and struggles. Deep, contoversial and somewhat amusing, Dalí has created an aura around his persona that will long live in the hearts of people. The Diary of A Genius provides a reader with the personal aspects of his life as well his relationships with Gala and other surrealists of his time.